Life of Parveen Shakir an Urdu poet- and his son Murad Ali.

Parveen Shakir died on December 26, 1994 in a traffic accident. Murad was 15  years at the time and an O-level student.

Parveen Shakir is known in Pakistan as a romantic poet. The subject of his poetry was mostly love and woman. Belonging to a literary family, she was involved in the teaching profession and later took a government job after passing the civil service exam.

The day of the accident is etched on the mind today 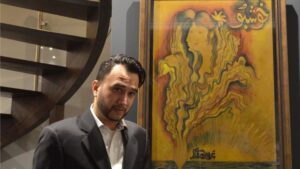 In an exclusive interview with  a renowned Media , Murad Ali said that he still remembers the cold morning of December 26 when his mother was separated from him forever due to an accident.

Murad Ali said, “It was raining. My mother got ready as usual and went to the office.” At about 9:30 the phone rang saying that your mother had an accident. Please come to PIMS.

“It was raining that day and the traffic signals were not working and the bus hit his car,” Murad said.

“On arrival at the hospital, I was told that when he (Parveen Shakir) was brought, his pulse was pounding but then he was pronounced dead.”

‘She was the center of their happiness’

Murad still misses the moments he spent with his mother.

He said, “No matter how busy my mother was, she would eat dinner at home and we would talk at the dinner table. How was the day at school?” How is the study going? How is time spent with friends? And there was a little bit of political talk, even though I was young at the time, I didn’t understand. ‘

Murad Ali says that he used to be very fussy about food but his mother also cooks the food of his choice. “I love my mother’s hand-made peas and Amy used to make Raho fish which I loved very much.”

“It simply came to our notice then.

“Amy was busy, the time I had left after consultations and office work came to me and those are the few memories I have of her.”

“It is very difficult to be a single mother in Pakistan. She used to go to consultations, to the office and also to spend time at home. She used to do multi-tasking. Today I realize that she worked hard. She had a hard time, she did a lot of things at once, I don’t understand how she managed.

Murad said that even during his stay in the United States, his mother took care of his happiness despite his busy schedule. He smiled as he recounted such a happy event.

“We were about to be two years old when we were in the United States, and a ten or twelve year old boy loves to watch cartoons, and being in the United States is a great way to visit Disneyland,” he said. I was very sorry that we could not go there.

According to Murad, he was very happy that day that his mother remembered his wish.

‘She wanted to send me away despite her love for me’

Murad Ali was Parveen Shakir’s only child and the center of their love but she still wanted to take him away from her. Explaining the reason, Murad said, “She used to tell me that we would put you in a boarding school. At first when I was young she wanted to put me in Aitchison, then Hassan Abdal asked to put me in Cadet College and then there was talk of Lawrence College.

“I told him you love me, these are all good places but I am your only son, I do not want to go.”

According to Murad, Parveen Shakir made an order to him for refusing to go boarding.

“They said, ‘OK, write me a long letter, then tell me why you don’t want to go.’

“Then I wrote a letter and my mother read it and said, ‘OK, you don’t want to go, then you will stay with us.’

She wanted to make me a neurosurgeon

Murad Ali said that his mother had given him clear guidelines regarding his education and future.

“She told me to become a doctor and also a neurosurgeon, which is a strict type of education, you do that and she insisted.”

Murad admits that his mother Parveen Shakir was very far-sighted. “She used to say that you must study computer, computer is very important, in the future the world will go this way and this statement of hers came true.”

Murad Ali said that Parveen Shakir always asked her to work hard and “she herself was very hardworking.”

“One of the things I’ve learned from my mother’s life is to work hard. He once told me that it was not necessary for me to get a job, that the royalty of my books was enough. I work for you to study more and become a better person.

She used to say that if you work hard, you will become something. Nothing can be achieved without hard work.

Murad also remembers the moments in his mother Parveen Shakir’s life when she used to take a walk after eating and write poetry.

Murad says she was thinking in those moments. “Whenever she liked something, she would write it down in her diary. She had a couple of diaries that were incomplete.”

My daughters ask how was Grandma?

Murad has kept a part of his eldest daughter’s name in order to include his mother’s name in his voice.

He said, “I have two daughters. The eldest is Shanze Parveen Ali.” She is seven years old. I have named Parveen after my mother and the other is named Arya.

‘She asks about her grandmother, there are pictures of her in many places in the house, medals, etc., then she asks who they are. I say your grandmother is dead, so at that time it is a pity that my mother could not be found, at that time my mother is very worried.

“I wish they were here at that time, they would have a connection with these children.”

Murad Ali said, “I felt very lonely after my mother left because I had no brother or sister. In such a situation, my aunt and grandmother came to live with me in Islamabad.

After the death of Parveen Shakir, his friends tried their best not to let him miss his mother.

According to Murad, Parveen Qadir Agha was not only her mother’s name but also loved her like a mother.

Due to Parveen Shakir’s government job, he got government house at different places in Islamabad. The last house he got before his death was in G-102.

“When my mother died, the government let me have this house,” Murad said. Until I graduate, it will be a great support. ”

Murad’s education fleet was also taken over by the government of the day. “The then Prime Minister Benazir Bhutto set a monthly stipend of Rs 60,000 for me which was very helpful to me and I was able to complete my education,” Murad said.

Islam settled in the Sacrament

Murad says that since Parveen Shakir spent most of his life in Islamabad, the elders decided to bury him in Islamabad, which he did not attend.

“My mother was buried in the H8 cemetery in Islamabad because she lived here all her life, most of her friends and acquaintances were here,” says Murad Ali.

Murad says, “Many people came to the funeral, bureaucrats, poets, people from his office, my grandmother and aunt also came from Karachi and my father also came that day.”

The chairperson of this trust is Parveen Qadir Agha. She was a senior in Parveen Shakir’s office and a good friend of his.

After the death of Parveen Shakir, his collection of words ‘Kaf Aina’, which was published, shows a poetic ghazal which seems to have been written for his son Murad. Two of his poems are enough to express their relationship.

God willing, your eyes will always be laughing

I don’t mind seeing you

Previous How bees make honey-Use of honey for medical treatment.
Next Stalker Software: How Can we Catch Spy Software On our Phone?