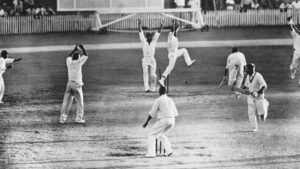 The moment the last Australian batsman was out and the match ended in a tied cricket match.

No one won, no one lost and no game ended in a draw, but then what a test match it was, at the end of which everyone was happy and satisfied, and that test match was a tied cricket test match.

What happened at the Woolen Gabba Ground in Brisbane on December 14, 1960, was unprecedented in the 84-year history of Test cricket match. It was a very interesting experience for all the 22 players who participated in this match.

Before mentioning this particularly interesting moment of the test, it is important to describe the events that preceded it in order to find out how it started.

It was a series of five Test matches played between West Indies and Australia for which the West Indies team had arrived in Australia.

Sir Frank Worrell became the new captain of the West Indies, which was all the more significant because he was the first non-white cricketer to lead the West Indies on a foreign tour. His deep attachment to cricket was evident to all.

He was an intelligent cricketer. He was 36 years old at the time, so as a senior he was respected by his teammates.

Australians were among those affected by Sir Frank Worrell’s personality during the tour of Australia, which is why the trophy presented to the winning team at the end of the series was specially designed and named after him. ۔

Even today the series between Australia and the West Indies is played under the name of Sir Frank Worrell Trophy.

Sir Frank Worrell, after becoming captain, had convinced all the players that this was a West Indies team. This is not a team from Barbados, Jamaica or any third fourth island.

The West Indies, led by Sir Frank Worrell, were hailed by Australians after the match was tied.

He had a straightforward captaincy formula. He had the ability to inspire players to avoid disappointment in the most difficult situations on the field.

The West Indies team also had two world-class batsmen in the form of Gary Sobers and Rohan Kanhai.

Opener Conrad Hunt was ready to make a new ball from the start of the innings. Gary Alexander was an experienced wicket-keeper. He was succeeded by Sir Frank Worrell.

The West Indies had the famous spin duo of Ramadhan and Valentine. Lance Gibbs was also ready to work his magic when the opportunity arose. Wesley Hall’s parrot was talking in fast bowling but he didn’t get much help from the other end.

Speaking of the Australian team, captain Richie Benoit had the services of experienced players. 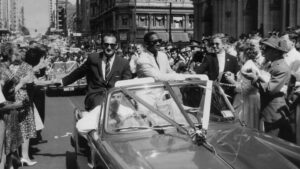 Australia captain Richie Benoit and West Indies’ Wesley Hall in December 2000 on the 40th anniversary of the match.

The batting line was balanced in the presence of Bobby Simpson, Norman O’Neill, Colin McDonald. Left-arm fast bowler Alan Davidson and league sniper Richie Benoit also had the status of authentic all-rounders due to their complete batting skills.

There was no denying the wicket-keeper’s ability to grout.

What happened in the Brisbane Test cricket which was tied?

The West Indies team did not have a good start to the tour. In the first class match against Western Australia, she was dismissed for 94 runs after being dismissed for only 97 runs.

New South Wales beat him by a huge margin of innings and 119 runs. The West Indies’ hopes were centered on Sergei Sobers but he failed to put up a significant performance in the second innings against Western Australia except for a century and 72 runs against the Australian XI.

Richie Benoit bowled him out for zero in New South Wales’ second innings, but captain Sir Frank Worrell was not disappointed with his side.

In the Brisbane Test, West Indies won the toss and elected to bat first, but apart from Camie Smith, who was playing his first Test at 65, Hunt and Kanhai’s wickets were given to Australia.

All three were dismissed by Alan Davidson. The 174-run fourth-wicket partnership between Sergei Sobers and captain Sir Frank Worrell at this stage tried to make up for the initial loss.

Sergei Sobers scores his tenth century in Test cricket His innings may or may not have impressed, but it did impress Sir Bradman, then Australia’s chief selector.

He himself went to the West Indian dressing room and praised Gary Sobers’ 132-run innings.

When it came to batting for Australia, he scored 505 runs, including 181 by Norman O’Neill, 92 by Bobby Simpson and 57 by Colin McDonald.

Australia started the second innings on the fifth day with a target of 233 runs to win the match.

The Australian team was on the verge of defeat. At this stage, captain Richie Benoit and Alan Davidson shared 134 runs for the seventh wicket to try to win.

What did Richie Benoit say to Bradman?

Athletes attending the 40th anniversary of the match attended a ceremony in Australia.

Australia needed 124 runs to win the tea break and had 4 wickets left. On this occasion, Sir Don Bradman asked Captain Richie Benoit what was on his mind. Win or draw?

Richie Benoit replied with satisfaction, “We will go to win.” Bradman was delighted with the response.

All interest came in the last over of that tied test cricket match.

Richie Benoit and Alan Davidson’s strategy was simple. He was not missing any opportunity to score between the wickets. The West Indies players were growing restless and captain Sir Frank Worrell was urging them to remain calm.

In the first over before the end of the match, David Sun and Richie Benoit’s brilliant partnership ended with a direct throw from Solomon’s midwicket.

Alan David Sun was forced to return to the pavilion with cumbersome steps after playing an excellent innings of 80 runs.

It was a memorable Test for Alan Davidson, who scored 44 and 80 in both innings and took 11 wickets in the match.

Wesley Hall was to make the final over. Australia needed just six runs off eight balls to win and had three wickets left. Most importantly, captain Richie Benoit was on the crease.

For a long time in Test matches played in Australia, an over consisted of eight balls instead of six.

Do not bounce and no ball

Before starting the Wesley Hallover, captain Sir Frank Worrell urged them to avoid bouncers and no balls.

First Ball : The first ball of the over landed on the foot of the wicket-keeper’s grout, on which Richie Benoit told him to run away and thus made a run of League By.

Second ball : Wesley Hall bounced against his captain’s direction but was caught by wicketkeeper Alexander in an attempt to hook Richie Benoit. He scored 52 runs. Australia’s score was 228 for eight.

Fourth ball : Makeff tries to play on the league side, the ball does not hit the bat and the wicket-keeper throws towards Wesley Hall but Hall fails to run out Makeef, and bye becomes a run.

Fifth ball : Volley Groot bounced the ball towards Square League where Rohan Kanhai was ready for the catch. Wesley Hall also had to run to catch, but in this attempt, he dropped the catch and became a run.

Sir Frank Worrell later wrote, “I will never understand how Wesley Hall got there to catch.”

Makeef was now in front and needed three runs off three balls.

Sixth ball : Makeff played a pull shot. The batsmen completed two runs and ran for the winning run but Conrad Hunt’s throw came in the hands of wicket keeper Alexander and he ran out the grout who could not save his wicket despite hitting the dive.

The score was 232 for nine and Australia had to win the Test by scoring just one run off two balls.

This was the famous run-out that gave Test cricket a unique result in the form of a tied.

The thrill of the final moments of this match can be gauged from the fact that when the wicket-keeper Groot was batting, he was so nervous that he could not find his batting gloves which had fallen inside his pads. Similarly, the last batsman Klein was also looking for his gloves. It turned out that he was sitting on those gloves.

Even after the match, the players were hesitant about the actual outcome. EN Makeff felt that Australia had lost the match. The West Indies thought they had won. Meanwhile, Sir Don Bradman approached Alan Davidson and said that he had made a new history.

Jack Ryder, an Australian selector, said of the Brisbane Test: “It’s great we won’t be able to watch a Test match like this again.”

But 26 years later, the Test between India and Australia in Madras (Chennai) in 1986 was also interestingly tied without a win or a loss and even then one ball of the match remained.

The only common denominator in both matches was Bobby Simpson of Australia. He was directly involved in both the Test matches. He was the opening batsman of the Australian team in the Brisbane Test and the coach of the Madras Test Australian team.

Previous Essay on Pollution.
Next Famous inventors of Kalashnikov, Atom Bomb, Dynamite|| Who regretted on their inventions.